Teaches the thinking behind the game. Even my wife who does not know backgammon enjoys studying the book with me

Enjoyed the book very much, hope to play him and take him down one day

Backgammon Galaxy is the best of the best. The Zizka method is a new knowledge experience in backgammon literature.

Best book I have read solar. Easy to follow, well edidited and grammar. Big passion for the game. 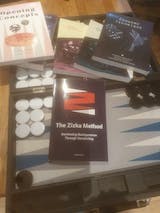